The Einsteinium Block was a block that was crafted from nine einsteinium ingots. The block gave off a light value of half a redstone torch. The original texture was an iron block, faded more to white. It's texture now is the smooth diamond block, changed to greyscale and faded white.

It was removed before the first release because the ingots were going to be used for the einsteinium bomb, and MCE though there was really no point of having this block in game, since he didn't think he would have made the other ore blocks for the other ores. Then in Beta 2.0, snapshot 17w11a specifically, this block as well as the other mineral blocks were added in. The reason was for when you have a crap ton of metals and you need to compress them into a block.

A picture of the block has actually been tweeted out, showing it's slight glowing effect at night [1]:

The old block texture, however not fully accurate as this was before NEI could get the block renderings. 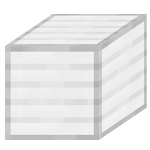